on June 21, 2009
Barcelona based IQBIT is an electronic composer from Rome based in Barcelona, Spain. IQBIT collaborates with Visual Artists, creating electronic music and sound for collaborative video and audio visual projects.  The works from these colloborations are both linked to research in synaesthesia but are also definitely are Visual Music.  Their visual music arises from a collaboration between music composers and visual artists, so the resulting video is a unity of the composition of visual and audio material.  Some of the videos are live sets - consisting of live audio and video. The words used to describe their works - sound video. Their live sets are described as Audio Visual Projects.
Iqbit myspace link: http://www.myspace.com/iqbit 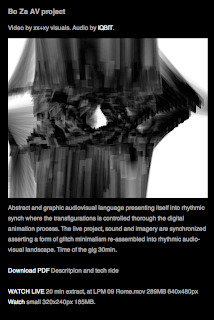 IQBIT has created the sound for a Audio Video live set with visuals by xx+xy visuals.
This project is called Bo Za AV project and is documented online on the xx+xy visuals website. There are also high quality video excerpts.
Project Description: "Abstract and graphic audiovisual language presenting itself into rhythmic synch where the transfigurations is controlled thorough the digital animation process. The live project, sound and imagery are synchronized asserting a form of glitch minimalism re-assembled into rhythmic audio-visual landscape. Time of the gig 30min." 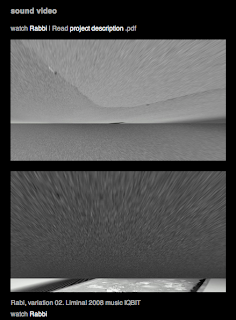 AV collaborative project by xx+xy visuals with IQBIT
"Experimental video project based on sound by IQBIT. The name of the work is directly inspired by the name
of the sound piece from IQBIT EP Liminal ‘08. This work is based on single black and white image that was
chosen among variety of images commonly used as desktop picture and typically representing beautiful
landscapes displayed on our desktop computers. This image is not representing any more urban landscape
with one bridge heading to some-where but is reconstructed into abstract and unique audiovisual language
presenting itself into rhythmic AV synch where the transfigurations is inspired and also controlled thorough
the digital animation process. This digital process of transfiguration of the image into abstract and computer
based work that use sound as source material, gives us the possibility to re-construct animations and
imagery through controlled rhythmic audio synch and effects of the software. The Rabbi sound and imagery
are synchronized asserting a form of glitch minimalism re-assembled into rhythmic audio-visual landscape. "
Source: Rabbi Project Description
http://www.xxxyvisuals.com/projects/AV_Rabbi_xxxy_iqbit/Rabbi-description_bio.pdf
Video excerpts at the above link also.
Quick link to video here.
Rabbi version 2 video link.

Maura McDonnell
Maura McDonnell is a visual music artist and researcher based in Ireland. She creates visuals for new music and electronic music concerts, fixed media and installation productions. The medium of choice is visual effects and generative effects video and the style of her work is abstract. The meaningfulness that she seeks in her work is to explore the emotional, musical and evocativeness potential of music in a shared similarly crafted visual world. Maura also lectures on the M.Phil in Music Media Technology Masters Course at Trinity College, Dublin, Ireland and support students to engage with visual music in their own works. Please get in touch if you would like to include your work or research on this blog. 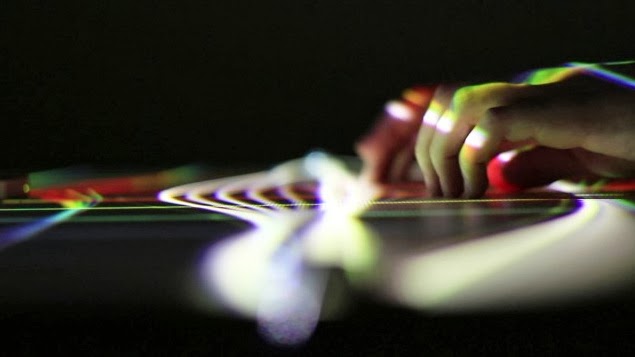 Felix Faire (UK), a Parametric System Designer had designed some very interesting interactive installations. One of these, Contact is an interface with which to manipulate and visualize sounds. Beautiful results. View Contact: Augmented Acoustics CONTACT: Augmented Acoustics from Felix Faire on Vimeo . "CONTACT is a tangible audio interface to manipulate and visualize sounds generated from interaction with a simple wooden surface. Any physical contact with the table generates acoustic vibrations which are manipulated and visualized LIVE as they occur using several communicating pieces of software. All code will be opensource and available on github. Bartlett School of Architecture Msc AAC Tutor: Ruairi Glynn" More information: http://www.coroflot.com/felixfaire/profile Vimeo Channel: https://vimeo.com/felixfaire 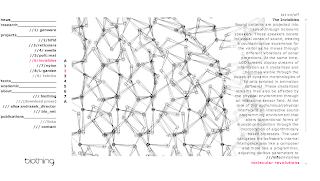 I have just come across this most interesting installation research project to be shortly exhibited in paris. There is a lot of imagery that uses software generative processes to create "scripted" imagery - these images are always incredibly beautiful, and ordered displaying the most wonderful 'ordered' patterns that would be very hard to realise/create by hand processes. When these patterns are tied up to audio processes, then the most incredible synergy seems to take place. This project is a very physical realisation of both scripted animation and an interactive sonar field. What caught my eye was the imagery and the tight connection with sound. (Author comment) "b iot(h)ing - Invisibles is an interactive installation exhibited at the Prague Biennale and is to be exhibited at the Centre Pompidou in Paris in 2009. ‘Invisibles' by biot(h)ing uses holosonic speakers to create sound patterns projected into an interactive space. These speakers isolate in 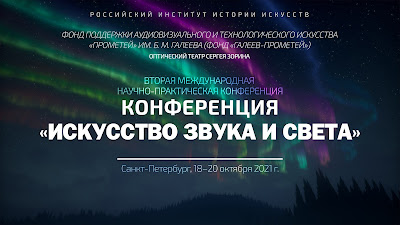 The Art of Sound and Light, St Petersburg

SECOND INTERNATIONAL SCIENTIFIC AND PRACTICAL CONFERENCE "THE ART OF SOUND AND LIGHT", SAINT PETERSBURG, took place from OCTOBER 18–20, 2021. The conference was online this year.  The conference was organised and hosted by: The Department of Organology inside the Russian Institute for the History of the Arts, the Foundation for support of the audiovisual and technological art “Prometheus” (Foundation “Galeev-Prometheus”) and Sergey Zorin’s Optical Theater.  https://artcenter.ru/en/second-international-scientific-and-practical-conference-the-art-of-sound-and-light/   The three day event was co-ordinated by Olga Viktorovna Kolganova — Department of Organology Scientific Research Scientist, Russian Institute for the History of Art (St. Petersburg). The organising committee was: Olga Viktorovna Kolganova, Anastasia Borisovna Maksimova - Associate Professor of Kazan State Power Engineering University, Jörg Jewanski - Adjunct Professor at the University of Münster, Germany, Serge